My server was compromised through Redis and used as part of a DDOS.

On 3 Nov 2015, Salvatore Sanfilippo, the creator of Redis, posted about how to gain access to a server running Redis. Here’s the important bit: out of the box, Redis accepts connections from anywhere and has no password. This makes it “basically an on-demand-write-this-file server,” which includes writing to .ssh/authorized_keys.

Here’s an example of an authorized_keys file created:

After gaining access to the server, the attackers created /root/8ucx.1, which appears to be the “installer” for the malware. It creates executables in /boot/ with random filenames, and corresponding services in /etc/init.d/ to run those executables. It also adds a cronjob in /etc/cron.hourly/cron.sh which brings up all the interfaces every hour (in case you tried to stop the DDOS traffic with ifdown.)

At 5:26 AM, the malware began sending DDOS traffic.

At 5:36 AM, DigitalOcean disabled networking after my instance had sent at 2 Gbps for 10 minutes.

I deployed my website to a fresh instance and pointed the DNS away from the bad machine.

The first thing I did was check htop for suspicious processes. Fortunately, they picked very suspicious names: .lz followed by a random number.

Unfortunately, their executable copies itself to /tmp/ before running. But they have to be launched somewhere, right? If I were a malware developer, I’d probably install a cron job or init script.

They didn’t add any new crontab entries, but they left some more files with very suspicious names in /etc/init.d/: pyqxacywjm and .zl (not pictured). 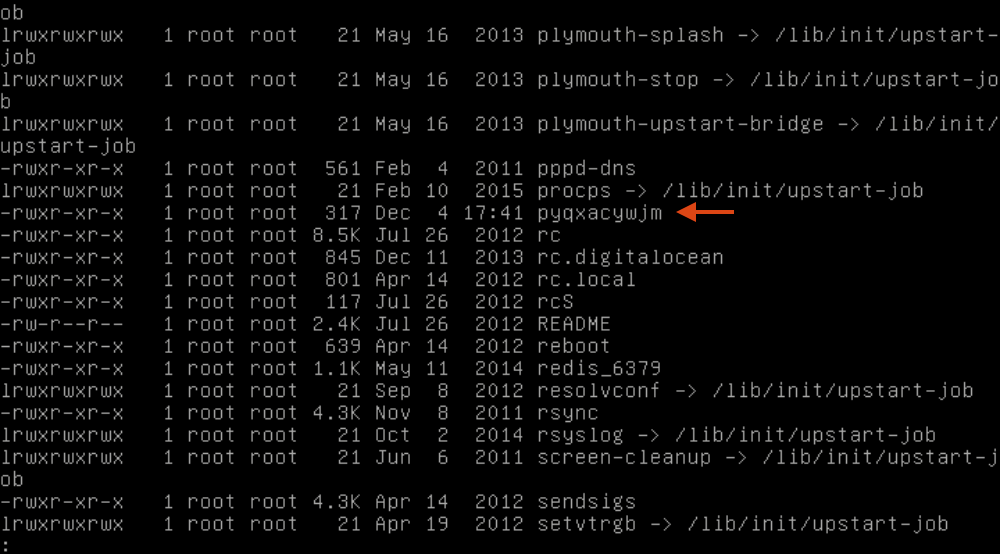 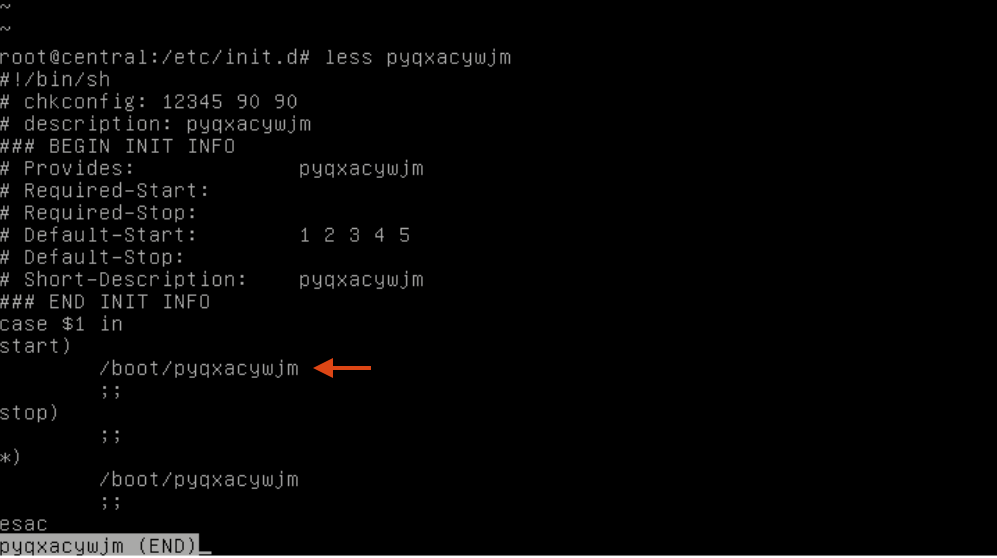 So we’ll just delete these files, kill the running process, and be done with it, right? Not so fast: several minutes after I deleted everything, the files in /boot/ came back under different names, and with corresponding init scripts. (For some reason, .zl wasn’t put back — maybe because I put another file in its place.)

I scrolled through the processes again, and found another suspicious thing: multithreaded pwd?!

Process names are not trustworthy, because applications can overwrite argv[0]. Fortunately, Linux puts a symlink to the original executable in /proc/$PID/exe. Following this symlink led to the executable in /boot/!

One last problem: occasionally, I would see a bunch of suspicious commands run, including ifconfig, netstat, and route:

The process is parented to init, which means the real parent exited before htop could observe it. Fortunately, we have Brendan Gregg’s excellent perf-tools scripts. They wrap the Linux kernel debugging framework ftrace (similar to DTrace on Solaris and BSD).

I wanted to use execsnoop to show calls to exec(), but DigitalOcean disabled my instance’s network connection. Rather than type the program in like an animal, I found David Butler’s JS console one-liner that automates typing into DigitalOcean’s web VNC client:

It doesn’t support any characters that require the shift key, so I encoded the script as hex, then wrote this Python script on the server to decode it:

It took awhile for execsnoop to catch anything, but when it did, I felt like an idiot:

They put the script in /etc/cron.hourly/, not a user’s crontab! In case you’re curious, here’s what it looks like:

So if a sysadmin tries to stop the outgoing DDOS traffic with ifdown, it doesn’t matter because the interface will be turned on again the next hour! What assholes.

And to confirm that it’s actually being called by cron, I piped execsnoop into this Python script:

After I cleaned the server, DigitalOcean turned on networking and I uploaded the files to VirusTotal. VirusTotal says this is XorDDOS.

Because the malware customizes its binaries, each installation is slightly different and the hashes won’t match.

The attackers were not very good at programming: one of their scripts kept crashing and printing this to the first virtual terminal. 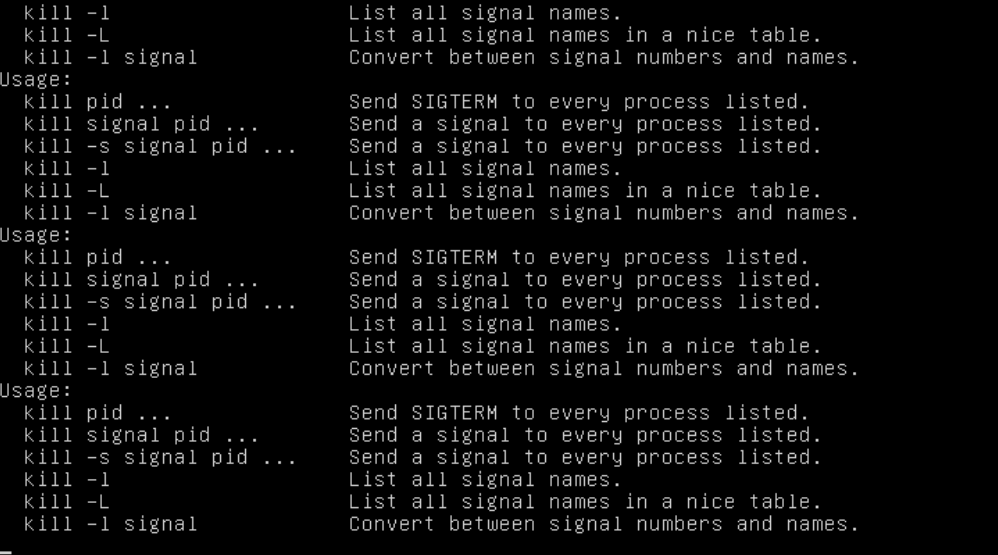 At one point, an automated SSH cracker guessed harrypotter as a username. Also very revealing about our industry: they only bother trying male first names.